The Ghost in the Glass, the Grandfather I Never Knew

Posted in Ancestry, and Genealogy 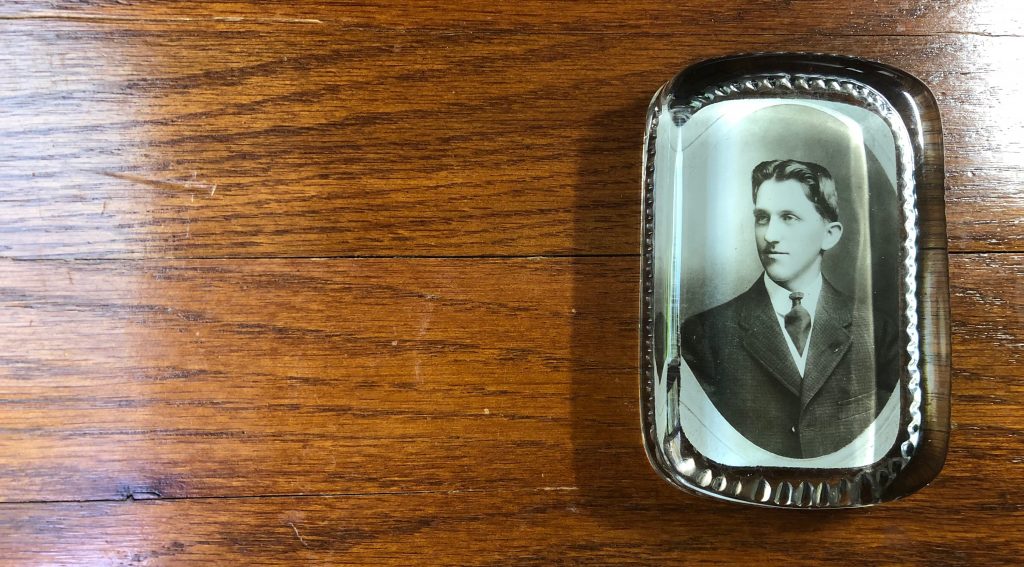 In 2015, the ghost in the glass came to me after we cleared my parents’ home. When I saw him, I immediately recognized who he was. The ghost was my paternal grandfather, present in the form of portrait adhered to the back of a glass paperweight. In my grandmother’s three story Victorian home, the photographic portraits of my grandfather were tucked away, not to see the light of day until many decades later. But the paperweight with the portrait of my impeccably dressed grandfather was always there, lying on the mirrored cobalt blue coffee table, refracting the light of the sun and forcing my brother and me to notice his presence. The reappearance of this almost magical object in my life intrigued me. I wanted to learn as much as I could about him beyond the sparse comments that family members made about him when I was young. I leveraged Ancestry’s research capabilities and began to uncover his story.

In her book, The Lost Family, Libby Copeland describes people who delve into family genealogy as “seekers,” those people with an intense drive to understand more about their own origins. It’s an apt description of a phenomenon that I believe is likely to happen to anyone who looks into their family history. It certainly happened to me. My straightforward task of finding my father’s military record for VA benefits turned into a quest that now has no end in sight. The search for my father’s records started it. But it was the ghost in the glass who led me to becoming a seeker, myself.

For seekers, the most intoxicating draw in seeking is the possibility of uncovering stories of particular ancestors who are shrouded in mystery. They may hold a place of legend in the family. They may be an ancestor who was seemingly never photographed, making one wonder what this person actually looked like. Most powerful of all, they may be ancestors you don’t know because they were missing from your life. It’s the draw of long lost family that drives seekers to seek the most. And when the story of an unknown ancestor is revealed, the personal connection can be profound.

Such is the case with my paternal grandfather. He died decades before I was born, a hundred years prior to my writing of this tribute to him. Yet, I felt his presence in my life as much by his absence as by his light-refracting portrait on the coffee table.

Raymond Clarence Griesemer was born on December 4th, 1893 in Allentown, Pennsylvania, to David Griesemer and Louisa Schmid. His father was a prominent member of Allentown society along with his uncle, who owned and operated Allentown’s famous Duck Farm Hotel. Raymond grew up in Allentown as the youngest member in a large family with six brothers and two sisters. Growing up, he witnessed the transformation of Allentown from a rural community to a significant Pennsylvania city with breweries, plants, and mills. It was an era of growth, not only for Allentown, but for the entire country.

Raymond became a young man in 1910, when the Ragtime era was reaching its peak. Sometime around 1914, Raymond met a young Allentown woman named Esther Simonton Rahn. Esther was to become the beloved grandmother in my immediate family. Raymond and Esther’s early courtship remains a mystery. I had originally assumed that they courted in 1916, the year before their wedding. I recently discovered, my assumption was incorrect.

As a seeker, I am often discovering that the family legends passed down from one generation to the next are often just that – merely a legend. At the same time, many stories that turn out to be true are the ones that remain intentionally hidden for years. My grandparent’s interrupted courtship turns out to be just such a story, one that was a woman-to-woman secret between my grandmother and my cousin. She recently confided that Raymond wanted to marry grandmother sooner. Her parents, however, were either opposed to the match or wanted her to wait. Rejected, Raymond set off on a trip to the South Pacific – not a small excursion in those days nor inexpensive. I continued searching for documentation in Ancestry and discovered his name on the passenger manifest of the S.S. Lurline, dated June 8, 1915, traveling from Honolulu to San Francisco. This document not only confirmed the story, it gave meaning to a set of three photographs taken onboard the Lurline, including two photographs of two different young women taken on the ship’s promenade deck.

My grandfather did return to Allentown, at least by 1916. In several photographs of Raymond and Esther, one with her parents and siblings, were likely taken before their wedding. Through Ancestry, I uncovered an interesting close set of dates. My grandparents registered their marriage license on June 4th of 1917. The next day on June 5th, my grandfather registered for the draft with World War I Selective Service. Then on the following day, June 6th, he married my grandmother in the parsonage of Christ Lutheran Church. My father was born almost a year to the day of their marriage license on June 4th, 1918. They named him with my grandfather’s full name of Raymond Clarence Griesemer, making my dad a “junior.”

My grandparents began their new life together in Allentown and the surrounding Lehigh Valley with their infant son. Life for them was looking up. He was working in the family business, Allentown’s most prominent stationery store and enjoying new prosperity that had come to them after many acres of family land had been sold. In one photograph, my father, grandmother and father appear with a new Model A Ford. In 1921, my grandmother gave birth to my uncle Richard, giving my grandparents two boys and the hope of a bright future after the end of World War I.

While my grandfather survived the great war and the Spanish Flu pandemic of 1918, the often forgotten plague of that time, tuberculosis, took him from his family. In less than a year after the birth of my uncle, he contracted TB. Years later, some in the family claimed if he had gone to a sanatorium, he might have lived, a legend yet to be verified. The Allentown Morning Call reported in January 1922 his health was improving, but on march 15th he died, leaving a young widow, two sons too young to remember him. I am one of five grandchildren who never met him.

My grandfather’s untimely death left a great hole in the family. My grandmother never remarried. A widow for the last 60 years of her life, she fulfilled her role as a mother to two boys and became the adored grandmother who my brother, my cousins, and I loved so much.

As my grandparents’ story came to life through my research, I began seeing other aspects of his absence. My grandmother supported of her son’s desire to marry a young Algerian Jewish woman he met during the World War II. My mother arrived in 1950 on the RMS Queen Mary, and my grandmother took her under her wing, defending her against some in the family who made anti-Semitic remarks.

I believe she cared deeply for my mother both because she liked her, and above all realized how important she was to her son’s happiness. Looking back, I wonder if losing my grandfather to tuberculosis so soon after marrying him made her acutely aware of what she lost not marrying my grandfather sooner. Had she followed her own desire for happiness, against the wishes of her family, she would have had more years with her husband. The major decisions we make can lead to unalterable consequences, so far all we know, it could have been many years.

Seekers are often drawn to stories of others who seek. It is unalterable consequences that underlie the two highly successful television series. Who Do You Think You Are? features well-known public figures who become seekers themselves. Long Lost Family follows people who are seeking missing family members, often after many years of trying. In the many episodes, I found commonalities at the core of who we are.

When you uncover your ancestors’ stories, you form an unexpected personal connection with them. In episode after episode of Who Do You Think You Are?, even the best actors are reduced to tears – genuine tears – after viscerally feeling that connection. Even more moving is witnessing long lost family members finding each other. Long lost siblings, children, and parents all describe the same feelings of instant connection with someone who should be a stranger to them. Even their immediate family will say that they never realized how much they missed that connection until it happened.

I will never be able to know my grandfather, see his expressions, hear his voice, and feel his love. Like the many children who’ve lost grandparents and parents to the pandemic and the awful war in Ukraine, he will remain an empty place in my life, one whose presence I can only imagine. But the glass paperweight that now sits on my desk connects me to him. It never weighs down papers. Instead, it serves to give weight to my continuing genealogical research. Eventually, I hope to understand who he was and grasp what he meant to my grandmother. I want to better know the ghost in the glass. ❖